From Sajun.org
Jump to: navigation, search
Seal of the Department of the Navy

The United States Navy is the branch of the United States armed forces responsible for naval operations. The U.S. Navy consists of more than 300 ships and over 4,000 operational aircraft. It has over a half million men and women on active or ready reserve duty.

The United States Navy traces its origins to the Continental Navy, which the Continental Congress established during the American Revolutionary War. The United States Constitution, ratified in 1789, empowered Congress "to provide and maintain a navy." Acting on this authority, Congress ordered the construction and manning of six frigates; one of the original six, the USS Constitution, familiarly known as "Old Ironsides," survives to this day.

History of the Navy

The Continental Navy was established by the Continental Congress on October 13, 1775, who authorized the procurement, fitting out, manning, and dispatch of two armed vessels to cruise in search of munitions ships supplying the British Army in America. The legislation also established a Naval Committee to supervise the work. All together, the Continental Navy numbered some fifty ships over the course of the American Revolutionary War, with approximately twenty warships active at its maximum strength.

After the American War for Independence, Congress sold the surviving ships of the Continental Navy and released the seamen and officers. In accordance with the Constitution, Congress ordered the construction and manning of six frigates on March 27, 1794 and in 1797 the first three frigates, USS United States, Constellation and Constitution went into service. The frigates became famous in the War of 1812, where they unexpectedly defeated the British Royal Navy on a number of occasions.

During the American Civil War, the Navy was an innovator in the use of ironclad warships, but after the war slipped into obsolescence. A modernization program beginning in the 1880s brought the U.S. into the first rank of the world's navies by the beginning of the 20th century.

The Navy saw relatively little action during World War I, but the primary goal of the attack on Pearl Harbor was to cripple the Navy in the Pacific Ocean. The action was strategically ineffective, however, and during the next three years of hard fighting, the U.S. Navy grew into the largest and most powerful navy the world had ever seen.

Navy sailors are trained in the core values of Honor, Courage, Commitment. Sailors cope with boredom on long cruises of six months to a year, and cherish their time in their home ports, as well as vacations at ports abroad.

The naval jack of the United States is a blue field with 50 white stars, identical to the canton of the ensign, both in appearance and size. A jack of similar design was first used in 1794, though with 13 stars arranged in a 3–2–3–2–3 pattern.

On 31 May 2002, Secretary of the Navy Gordon England directed all US naval ships to fly the First Navy Jack for the duration of the War on Terrorism, beginning September 11 2002.

A distinct dialect of English has developed amongst sailors over the course of the last four centuries. Naval jargon is spoken by American sailors as a normal part of their daily speech.

There are three distinct components of Naval jargon:

The two main fleets are the Pacific Fleet and the Atlantic Fleet. Under these two organizations fall the numbered fleets.

Commissioned officers in the Navy have paygrades from O-1 to O-10. Officers with superior performance may be promoted. Officers between O-1 and O-3 are called junior officers, O-4 to O-6 are called senior officers, and O-7 to O-10 are called flag officers. See U.S. Navy officer rank insignia for a complete list of paygrades and corresponding ranks.

Commissioned officers belong to one of the following communities:

All new active-duty enlisted members receive basic training ("boot camp") at the Recruit Training Command in Great Lakes, Illinois. Those who have a contract for a specific rating continue onto "A" schools for training in the rating. Those who don't have a specific rating go into the fleet to learn on the job and later strike for a rating.

To denote qualifications received in the United States Navy, a number of badges and insignia are issued to service members upon completion of approved Personal Qualification Standards (PQS) which are tasks and exams required for qualification in a given field.

A full list of Navy Qualification Badges is displayed on the article: Military badges of the United States

The names of commissioned ships of the U.S. Navy all start with USS, meaning 'United States Ship'. Non-commissioned, civilian-manned vessels of the U.S. Navy have names that begin with USNS, standing for 'United States Navy Ship'. A letter based hull classification symbol is used to designate a vessel's type. The names of ships are selected by the Secretary of the Navy. The names are that of the states, cities, towns, important persons, famous battles, fish, and ideals. Usually, different types of ships have names originated from different types of sources.

See List of ships of the United States Navy for a more complete listing of ships past and present.

Amphibious assault ships carry Marines and is the platform for Marines aircraft. They project power as aircraft carriers do.

Some other submarines, past and present.

Some other cruisers, past and present.

Greyhounds of the Sea. The destroyer evolved from the need of navies to counter a new ship which made a devastating debut in the Chilean Civil War of 1891 and in the Sino-Japanese War of 1894. This was the swift, small torpedo boat that could dash in close to the larger ships, loose their torpedoes and dash away. The world's navies recognized the need for a counter weapon and so the torpedo boat destroyer—later just "destroyer"—was born. From the first U.S. destroyer commissioned in 1902 to the famous ships of World War II to the Spruance class destroyer to the Arleigh Burke class, the U.S. Navy's destroyers have been evolving. And that evolution continues into the 21st century with the coming of the DD(X). (Credit: US Navy Introduction to Destroyers)

Some other destroyers, past and present.

Modern frigates are mainly perform anti-submarine warfare and escort other ships. (Frigates are slowly being retired from the U.S. Navy fleet in favor of the development of the Littoral Combat Ship.)

Some other frigates, past and present.

Battleships are the best armored ships with the largest firepower from large-caliber guns. Until becoming obsolete in World War II because of aircraft carriers, they dominated naval battles. The US Navy had decommissioned all of its battle ships. At least two TLAM capable platforms remain in "Inactive" Reserve status.

The submarine has a long history in the USN. It began in the late 19th century, with the building of the SS-1, the USS Holland. The boat was in service for 10 years and was a developmental and trials vessel for many systems on other early submarines.

The submarine really came of age in World War I. The USN did not have a large part in this war, with its action mainly being confined to escorting convoys later in the war and sending a division of battleships to reinforce the British Grand Fleet. However, there were those in the USN submarine service who saw what the Germans had done with their U-boats and took careful note.

Doctrine in the inter-war years emphasised the submarine as a scout for the battle fleet, and also extreme caution in command. Both these axioms were shown to be wrong very quickly after the attack on Pearl Harbor in December 1941. The submarine skippers of the fleet boats of World War II waged a very effective campaign against Japanese merchant vessels, doing to Japan what Germany failed to do to the United Kingdom. They were aggressive in their prosecution of their task, and operated far from the fleet.

In addition to their commerce raiding role, submarines also proved valuable in air-sea rescue. There was many an American aircraft carrier pilot who owed his life to the valour of USN submarine crews, including future U.S. President, George H. W. Bush.

After WWII, things continued along much the same path until the early 1950s. Then a revolution, that was to forever change the nature of the submarine arm occurred. That revolution was the USS Nautilus.

The Nautilus was the first nuclear-powered submarine. Up until that point, submarines had really been, at their most basic level, torpedo boats that happened to be able to go underwater. They had been tied to the surface by the need to charge their batteries using diesel engines relatively often. The nuclear power plant of the Nautilus meant that the boat could stay underwater for literally months at a time, the only limit in the end being the amount of food that the boat could carry.

Another revolution in submarine warfare came with USS George Washington. Nuclear powered, like the Nautilus, the George Washington added strategic ballistic missiles to the mix. Earlier submarines had carried strategic missiles, but the boats had been diesel powered, and the missiles required the boat to surface in order to fire. The missiles were also cruise missiles, which were vulnerable to the defences of the day in a way that ballistic missiles were not.

The George Washington's missiles could be fired whilst the boat was submerged, meaning that it was far less likely to be detected before firing. The nuclear power of the boat also meant that, like the Nautilus, the George Washington's patrol length was only limited by the amount of food the boat could carry. Ballistic missile submarines, carrying Polaris missiles, eventually superseded all other strategic nuclear systems in the USN. Deterrent patrols continue to this day, although now with the Ohio class boats and Trident missiles. 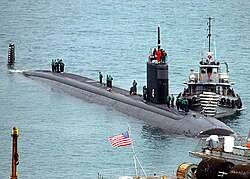 Given the lack of large scale conventional naval warfare since 1945, with the USN's role being primarily that of power projection, the submarine service did not fire weapons in anger for very many years. The development of a new generation of cruise missiles changed that. The BGM-109 Tomahawk missile was developed to give naval vessels a long range land attack capability. Other than direct shore bombardment, and strikes by aircraft flying off carriers, the ability of naval vessels to influence warfare on land was limited.

Now, instead of being limited to firing shells less than 20 miles inland from guns, any naval vessel fitted with the Tomahawk could hit targets up to 1,000 miles inland. The mainstay of the Tomahawk equipped vessels in the early days of the missile's deployment were the Iowa class battleships, and the submarine fleet. The Tomahawk was first used in combat on 17 January 1991, on the opening night of Operation Desert Storm. On that day, for the first time since the surrender of Japan in 1945, an American submarine fired in anger when Tomahawks were launched by US boats in the eastern Mediterranean.

Since then, the Tomahawk has become a staple of American campaigns. It has seen use in no less than three separate wars. It has also been exported to the United Kingdom, which has also fitted it to submarines. The Tomahawk has seen a change in the design of attack submarines. At first it was fired through torpedo tubes, but more recent US boats have been fitted with vertical launch systems to enable them to carry more of the weapons.

In the early 21st century, the USN submarine fleet is made up entirely of nuclear powered vessels. It is the most powerful of its type in the world. However, there are those who worry that there are not enough boats in the fleet. As with other branches of the US military the budget cuts of the late 1980s and the early 1990s, as the Cold War ended, followed up by the War on Terrorism, have left little or no slack in the system. This point is illustrated by the fact that in 2003, for the first time since 1945, a US submarine made two back-to-back war patrols.

Notable members of the U.S. Navy