From Sajun.org
Jump to:navigation, search
Share
File:Enrico Fermi.png
Enrico Fermi; Interestingly the blackboard contains an error: in the equation for α, ℏ (h-bar) and e are the wrong way around

Enrico Fermi (September 29, 1901 – 29 November 1954) was an Italian-American physicist most noted for his work on beta decay, the development of the first nuclear reactor and for the development of quantum theory. Fermi won the 1938 Nobel Prize in Physics.

Enrico Fermi is probably unique in the annals of twentieth century science as a scientist who was brilliant in both theory and experiment. In an era where specialization in one of these was the norm, he showed extraordinary virtuosity in devising both the most elegant theories and the most convincing experiments. This success came from an intense desire to view physics as a complete science, and from a most disarming modesty, which enabled him to do even mundane calculations and experiments with characteristic drive and zest. Fermi led the construction of the first nuclear pile, which produced the first controlled nuclear chain reaction. He was one of the great leaders of the Manhattan Project. Fermi is known as the originator of the Fermi paradox in SETI research, when in a discussion of the possibility that intelligent aliens might exist, he famously asked "Where are they?" Fermions, as well as the Fermi National Accelerator Laboratory, are named in his honor. In addition, the element fermium and Fermi statistics were named in his honor. The Enrico Fermi US Presidential Award was established in 1956 in memory of Fermi's achievements and excellence as a scientist. The department of the University of Chicago where he used to work is now known as The Enrico Fermi Institute. Fermi problems, such as the classic "How many piano tuners are there in Chicago?" are named after Fermi's use of such estimation problems to teach students the importance of dimensional analysis, approximation methods, and clear identification of assumptions.

==Early years==
Fermi was born in Rome. He was inseparable in childhood from his brother Giulio, who was just one year older. In 1915, Giulio died during minor surgery for a throat abscess. Enrico, desolate, threw himself into the study of physics largely as a way of coping with his pain. A friend of the family, Adolfo Amidei, guided Fermi's study of algebra, trigonometry, analytic geometry, calculus and theoretical mechanics. Amidei also suggested Fermi attend not the University of Rome but to apply to the prestigious "Scuola Normale Superiore" of Pisa, a special university-college for selected gifted students. The examiner at the Scuola Normale thought the 17-year-old Fermi's competition essay worthy of a doctoral exam. The examiner summoned Fermi and predicted he would become a great scientist.

==Middle years==
In 1918 he attended university at the Pisa Institute where he graduated with a bachelor's degree in 1922. In 1923 Fermi spent 6 months in G�ttingen at Max Born's school, but was not happy with the excessively formal theoretical style of the leading school of quantum physics at the time. In 1924 he was in Leiden, Netherlands, to meet Paul Ehrenfest, and here he also met Einstein. Fermi took a professorship in Rome (the first course in theoric physics, created for him by professor Orso Maria Corbino, director of the Institute of Physics). Corbino worked a lot to help Fermi in selecting his team, which soon was joined by notable minds like Edoardo Amaldi, Bruno Pontecorvo, Franco Rasetti, [[Emilio Segr�]]. For the theoretic studies only, Ettore Majorana too took part in what was soon nicknamed the Group of "the Boys of via Panisperna" (by the name of the road in which the Institute had its labs - now in the Viminale complex, dicastery of police). The group went on with its now famous experiments, but in 1933 Rasetti left Italy for Canada and United States, Pontecorvo went to France, Segr� preferred to go teaching in Palermo.

==Later years==
Fermi remained in Rome until 1938. In 1938, Fermi won the Nobel Prize in Physics for his "demonstrations of the existence of new radioactive elements produced by neutron irradiation, and for his related discovery of nuclear reactions brought about by slow neutrons." 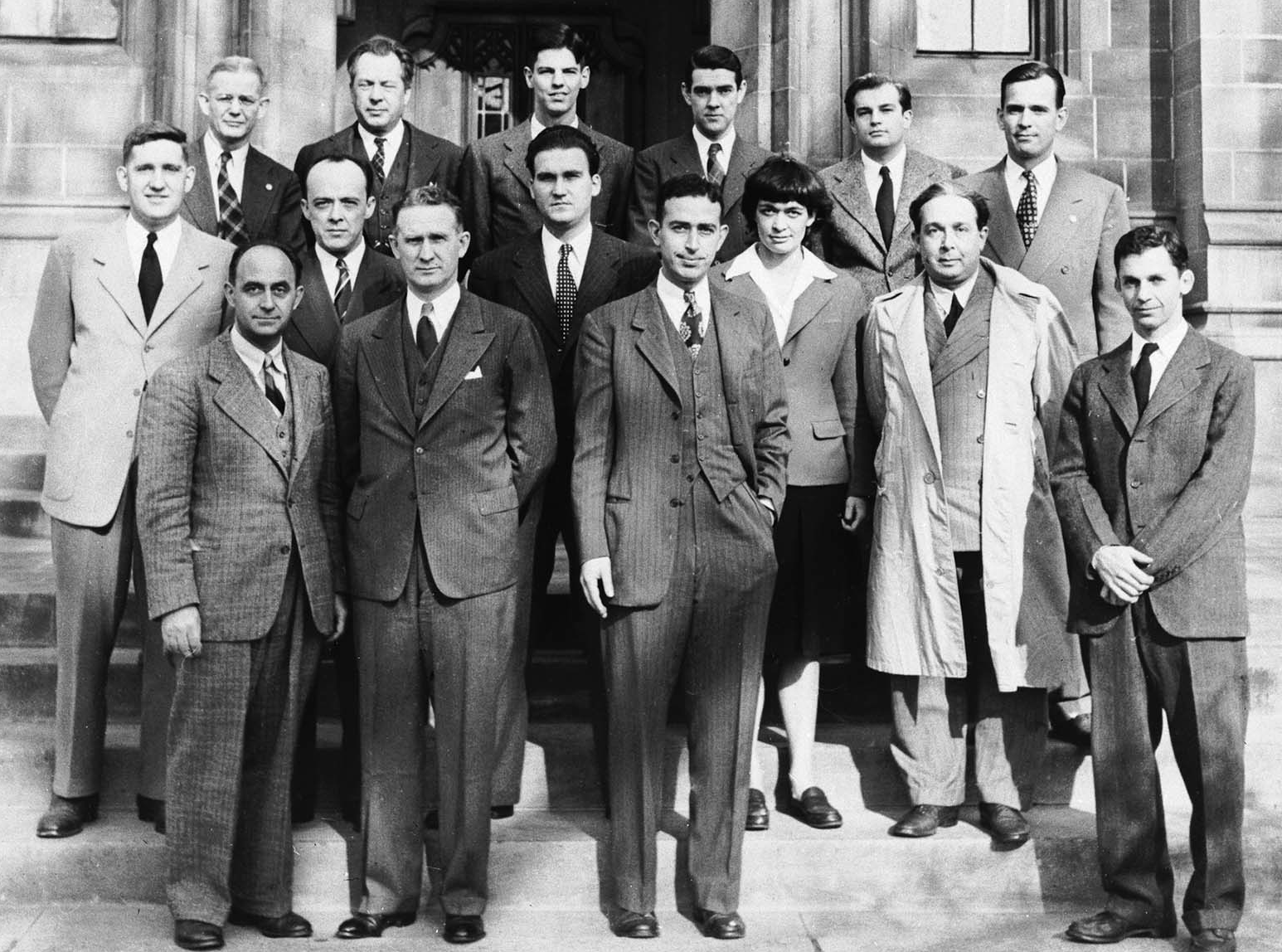 Fermi (bottom left), Szilard (second from right on bottom), and the rest of the pile team.

After Fermi received the prize in Stockholm, he, his wife Laura, and their children emigrated to New York. By this time, the Fascist government in Italy had instituted anti-Semitic laws, and Fermi's wife Laura Capon was Jewish. Soon after his arrival in New York, Fermi began working at Columbia University. At Columbia, Fermi verified the initial nuclear fission experiment of Hahn and Strassman (with the help of Booth and Dunning). Fermi then began the construction of the first nuclear pile at Columbia. Fermi recalled the beginning of the project in a speech given in 1954 when he retired as President of the American Physical Society: :"I remember very vividly the first month, January, 1939, that I started working at the Pupin Laboratories because things began happening very fast. In that period, Niels Bohr was on a lecture engagement in Princeton and I remember one afternoon Willis Lamb came back very excited and said that Bohr had leaked out great news. The great news that had leaked out was the discovery of fission and at least the outline of its interpretation. Then, somewhat later that same month, there was a meeting in Washington where the possible importance of the newly discovered phenomenon of fission was first discussed in semi-jocular earnest as a possible source of nuclear power." After the famous letter signed by Albert Einstein (transcribed by [[Le� Szil�rd]]) to President Roosevelt in 1939, the Navy awarded Columbia University the first Atomic Energy funding of $6,000. The money was used to develop the first nuclear reactor -- a massive "pile" of graphite bricks filled with uranium which went critical on December 2, 1942. The chain reacting pile was important not only for its help in assessing the properties of fission -- needed for understanding the internal workings of an atomic bomb -- but because it would serve as a pilot plant for the massive reactors which would be created in Hanford, Washington, which would be used to "breed" the plutonium needed for the bombs used at the Trinity test and Nagasaki. Eventually Fermi and Szilard's reactor work were folded in to the Manhattan Project. In Fermi's 1954 address to the APS he also said, "Well, this brings us to Pearl Harbor. That is the time when I left Columbia University, and after a few months of commuting between Chicago and New York eventually moved to Chicago to keep up the work there, and from then on, with a few notable exceptions, the work at Columbia was concentrated on the isotope separation phase of the atomic energy project, initiated by Booth, Dunning and Urey about 1940." Fermi was a man of enormous brilliance, mental agility and common sense. He was a very gifted theorist, as his theory of beta decay proves. He was equally gifted in the lab, working very fast and with great insight. Fermi often credited his speed in the lab for having won him the Nobel Prize, saying the discoveries would soon have been made by someone else -- he just got there first. When he submitted his famous paper on beta decay to the prestigious journal Nature, the journal's editor turned it down because "it contained speculations which were too remote from reality." Thus, Fermi saw the theory published in Italian and in German before it was published in English. He never forgot this experience of being ahead of his time, and used to tell his proteg�s: "Never be first; try to be second."

==Death and afterwards==
On November 29, 1954 Fermi died of cancer in Chicago, Illinois and was interred there in the Oak Woods Cemetery. He was 53. As Eugene Wigner wrote: "Ten days before Fermi had passed away he told me, 'I hope it won't take long.' He had reconciled himself perfectly to his fate."