This article is about the street in New York City. For other articles with the name Broadway, see: Broadway (disambiguation). 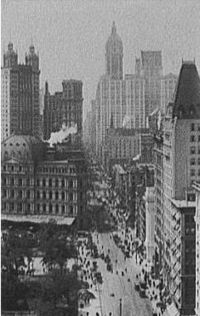 Broadway, as the name implies, is a big, wide avenue in New York City, New York, and is one of the main north-south thoroughfares in the city. It runs the length of Manhattan, the central borough, being the only street running from almost the southern tip of the island, where it starts at Bowling Green, to the northern tip.

There are continuations of Broadway, following the old Albany Post Road, in Hudson River towns of Westchester County, north of The Bronx. Diagonally crossing the Commissioners' Plan of 1811 of Manhattan streets, it has been marked by "squares" (some merely triangular slivers of open space) and induced some interesting architecture, such as the famous Flatiron Building.

File:DSCN3602 upbroadway e.JPG
A view up Broadway from Bowling Green, with the Chrysler Building visible in the background

The section of lower Broadway from its origin at Bowling Green to City Hall Park is the historical location for the city's ticker-tape parades, and is sometimes called the Canyon of Heroes in reference to such events.

One famous stretch near Times Square in Midtown, through which Broadway passes, is the home of many Broadway theatres, housing an ever-changing array of commercial, large-scale plays, particularly musicals. This part of Broadway, also known as The Great White Way, draws millions of tourists from around the world. Starring in a successful Broadway musical is considered by most singers, dancers and actors as the ultimate success in their chosen profession, and many songs, stories, and musicals have themselves been based around the idea of such success. The annual Tony Awards recognize some of the most successful new shows and revivals each year.

Further north, Broadway follows the old Bloomingdale Road as the main spine of the Upper West Side, passing the campus of Columbia University on Morningside Heights as it continues northwards.