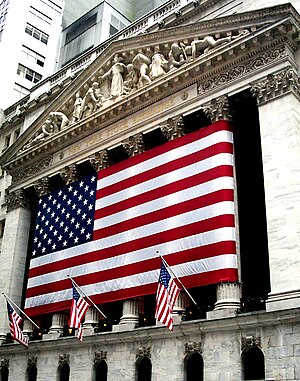 The New York Stock Exchange (NYSE) is one of the largest stock exchanges in the world. The NYSE is operated by the not-for-profit corporation New York Stock Exchange, Inc, with its main building located at 18 Broad Street, at the corner of Wall Street, in New York City, New York, U.S.A. NYSE is home to some 2,800 companies valued at nearly $15 trillion in global market capitalization. As of July 2004, all but two of the thirty companies in the Dow Jones Industrial Average were listed on the NYSE, the exceptions being Intel and Microsoft.

NYSE trades, unlike those on some other more "virtual" exchanges (e.g. NASDAQ), always involve face-to-face communication in a particular physical location. There is one staton at each post on the trading floor for each of the exchange's stocks. Exchange members interested in buying and selling a particular stock on behalf of investors gather around the appropriate post where a specialist broker, who is employed by a NYSE member firm, ( he/she is not an employee of the New York Stock Exchange) acts as an auctioneer in an open outcry auction market environment to bring buyers and sellers together and to manage the actual auction. They do on occassion facilitate the trades by committing their own capital (approx 10% of the time) and as a matter of course diseminate information to the crowd that helps to bring buyers and sellers together. Most of the time natural buyer and seller meet in a market that provides price discovery in an auction envirnment that produces the fairest price for both parties. The human interaction and expert judgement as to order execution differentiates the NYSE from fully electronic markets. The current structure of electronic and human order execution is constantly being improved to offer customers the greatest possible choice in order exectuion. This buying and selling creates a good deal of hustle and bustle which has been captured in several movies, including Wall Street.

The origin of the NYSE can be traced to May 17, 1792 when the Buttonwood Agreement was signed by twenty-four stock brokers outside of 68 Wall Street in New York under a buttonwood tree. On March 8, 1817 the organization drafted a constitution and renamed itself the "New York Stock & Exchange Board". This name was shortened to its current form in 1863. 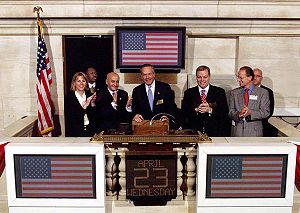 U.S. Secretary of Commerce Donald L. Evans rings the opening bell at the NYSE on April 23, 2003. Chairman Richard Grasso can also be seen in this picture.

The Exchange was closed shortly after the beginning of World War I (July 1914), but it was re-opened on November 28 of that year in order to help the war effort by trading bonds.

The Black Thursday crash of the Exchange on October 24, 1929 and the sell-off panic which started on Black Tuesday, October 29, precipitated the Great Depression. In an effort to try to restore investor confidence, the Exchange unveiled a fifteen-point program aimed to upgrade protection for the investing public on October 31, 1938.

On October 1, 1934, the exchange was registered as a national securities exchange with the U.S. Securities and Exchange Commission, with a president and a thirty-three member board. On February 18, 1971 the not-for-profit corporation was formed, and the number of board members was reduced to twenty-five.

Following a 554.26 point drop in the Dow Jones Industrial Average (DJIA) on November 24, 1997, officials at the Exchange for the first time invoked the "circuit breaker" rule to stop trading. This was a very controversial move and prompted a quick change in the rule; trading thereafter stops only when the DJIA drops at least 10 or 20 percent.

On September 17, 2003, NYSE chairman and chief executive Richard Grasso stepped down as a result of controversy concerning the size of his deferred compensation package. He was replaced as Chairman by John S. Reed, the former Chairman and CEO of Citicorp.