Several bishops of the Congregation of the Sacred Hearts of Jesus and Mary (Gulstan Ropert, Libert H. Boeynaems, Herman Koeckemann, and Stephen Alencastre) who served as Vicars Apostolic of the Hawaiian Islands lay buried under the large iron cross in the center of the cemetery. Remains of the early members of the Congregration of the Sacred Hearts also lay buried in a common grave on site. Other notable people lay buried in this cemetery including Robert William Wilcox. 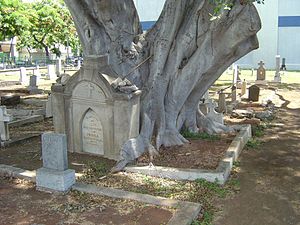 Various headstones grouped at the corner of the platform 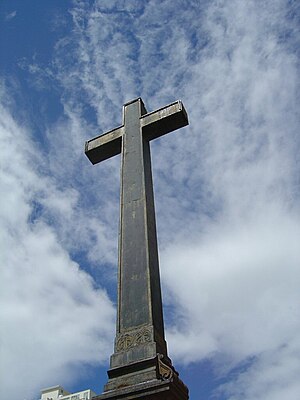 Central iron cross above the graves of the Vicars Apostolic

The plots closest to King Street are watered and maintained better. Those plots further in (close to the Hawaiian Electric Company yard) appear to be minimally maintained, if at all. Several grave markers are sequestered at the corner of what appears to have been a chapel and tree roots from a ficus have obscured the original plots.