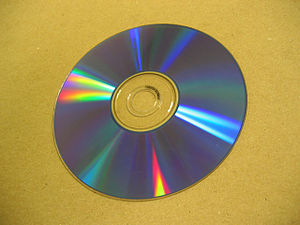 DVD is an optical disc storage media format that is used for playback of movies with high video and sound quality and for storing data. DVDs are similar in appearance to compact discs.

A DVD can contain:

The disc medium can be:

The disc may have one or two sides, and one or two layers of data per side; the number of sides and layers determines the disc capacity: DVD-RAM writers perform write checking to maintain data integrity.

Each medium can contain any of the above content and can be any layer type (double layer DVD-R is announced for 2004, while double layer DVD+R discs are already on the market, though scarce and expensive).

The "+" (plus) and "-" (dash) are two similar technical standards that are partially compatible. As of 2004, both formats are equally popular, with about half of the industry supporting "+", and the other half "-". It is open to debate whether either format will push the other out of the market, or whether they will co-exist indefinitely. All DVD readers are supposed to read both formats (though real-world compatibility lies around 90% for both formats), and most current DVD writers can write both formats.

Unlike compact discs, where sound (CDDA, Red Book) is stored in a fundamentally different fashion than data (Yellow book et al.), a properly authored DVD will always contain data in the UDF filesystem.

DVD-Video discs require a DVD-drive with a MPEG-2 decoder (eg. a DVD-player or a DVD computer drive with a software DVD player). Commercial DVD movies are encoded using a combination of MPEG-2 compressed video and audio of varying formats (often multi-channel formats as described below.) Typical data rates for DVD movies range from 3-10 Mbit/s, and the bitrate is usually adaptive.

The audio data on a DVD movie can be of the format PCM, DTS, MPEG audio, or Dolby Digital (AC-3). In countries using the NTSC standard any movie should contain a sound track in PCM or Dolby AC-3 format, and any NTSC player must support these two, all the others are optional. This ensures any standard compatible disc can be played on any standard compatible player.

Initially, in countries using the PAL standard (most of Europe) the sound of DVD was supposed to be standardized on PCM and MPEG-2 audio, but apparently against the wishes of Philips, under public pressure on December 5, 1997, the DVD Forum accepted the addition of Dolby AC-3 to the optional formats on discs and mandatory formats in players.

With several channels of audio from the DVD, the cabling needed to carry the signal to an amplifier or TV can occasionally be somewhat frustrating. Most systems include an optional digital connector for this task, which is then paired with a similar input on the amplifier. The selected audio signal is sent over the connection, typically over RCA jacks or TOSLINK, in its original format to be decoded by the audio equipment. When playing compact discs, the signal is sent in S/PDIF format instead.

Video is another issue which continues to present problems. Current systems typically include both composite video on an RCA jack, as well as S-Video in the standard connector. However neither of these connectors were intended to be used for progressive video, so yet another set of connectors has started to appear in the form of component video, which fully separates the signal into its three components (whereas s-video has two, and composite only one). Additionally, the connectors are further confused by using a number of physical connectors, RCA or BNC, as well as using VGA cables in a non-standard way (VGA is normally RGB). Even worse, there are often two sets of component outputs, one carrying interlaced video, and the other progressive. In Europe, SCART connectors are typically used, which offer a reasonable compromise between video quality, which is comparable and frequently superior to S-Video, and cost.

DVD Video may also include subtitles in various languages. They are stored as images with transparent background.

DVD Video may contain Chapters for easy navigation (and continuation of a partially watched film).

A major selling point of DVD Video is that its storage capacity allows for a wide variety of extra features in addition to the feature film itself. This can include audio commentary that is timed to the film sequence, documentary features, unused footage, trivia text commentary, games and film shorts.

Most DVD-Video titles use Content Scrambling System (CSS) encryption, which is intended to discourage people from making perfect digital copies to another medium or from bypassing the region control mechanism (see below). Discs can also specify that the player use Macrovision, an analog anti-copying mechanism that prevents the consumer from copying the video onto a VCR tape. This alone would not prevent the duplication of DVDs in their entirety without decrypting the data, given suitable equipment, although "consumer-grade" DVD writers deny this ability by refusing to duplicate the tracks on the disc which contain the decryption keys.

The CSS system has caused problems for the inclusion of DVD players in strictly open source operating systems, since open source player implementations can not officially obtain access to the decryption keys or license the patents involved in the CSS system. Proprietary software players may also be difficult to find on some platforms. However at least one successful effort has been made to write a decoder by reverse engineering, resulting in DeCSS. This has led to long-running legal battles and the arrest of some of those involved in creating or distributing the DeCSS code, through the use of the U.S. Digital Millennium Copyright Act, on the grounds that such software could also be used to facilitate unauthorized copying of the data on the discs.

DVD movies can contain a region code, denoting which area of the world it is targeted at, which is completely independent of encryption. The commercial DVD-video player specification dictates that players must only play discs that contain their region code. This allows the film studios to set different retail prices in different markets and extract the maximum possible price from consumers. With region coding, studios can dictate release schedules and prices around the world. However, many DVD players allow playback of any disc, or can be modified to do so. Region coding pertains to regional lockout, which originated from the video game industry.

European Region 2 DVDs may be sub-coded D1 through D4. "D1" identifies a UK-only release. "D2" and "D3" identify European DVDs that are not sold in the UK and the Republic of Ireland. "D4" identifies DVDs that are distributed throughout Europe.

Region 0 designates no actual region, but it is used as shorthand for a disc meant to be playable on all players. On such a disc, the actual region coding is R1/2/3/4/5/6. In the early days, region 0 players were created that would allow any region disc to be played in them, but studios responded by adjusting regioned discs to refuse to play if the player was determined 0 (since no player should anyway). This system is known as Regional Coding Enhancement or just RCE.

Many view region code enforcement as a violation of WTO free trade agreements; however, no legal rulings have yet been made in this area. However, many manufacturers of DVD players now freely supply information on how to disable the region code checking, and on some recent models, it appears to be disabled by default.

DVD-Audio is a new format to deliver high-fidelity audio content on a DVD. It offers many channels (from mono to 5.1 surround sound) at various sampling frequencies and sample sizes. Audio on a disc can be 16, 20, or 24 bit and can be at sampling rates of 44.1, 48, 88.2, 96, 176.4, or 192 kHz (the highest sampling rates of 176.4 and 192 kHz are limited to stereo only). In addition, different sampling sizes and frequencies can be used on a single disc. Audio is stored on the disc in LPCM format or is losslessly compressed with Meridian Lossless Packing. The DVD-Audio player may downmix surround sound to stereo if the listener does not have surround sound. DVD-Audio may also feature menus, still images, slideshows, and video. Also, DVD-Audio discs usually contain Dolby Digital or DTS versions of the audio (lossy compressed, usually downsampled to lower sampling sizes and frequencies) in the DVD-Video section. This is done to ensure compatibility with DVD-Video players.

The introduction of the DVD-Audio format angered many early-adopters of the DVD format. While the DVD-Audio discs do have higher fidelity, there is debate as to whether or not the difference is distinguishable to typical human ears. DVD-Audio currently forms a niche market, probably due to requiring new and rather expensive equipment. DVD-Audio is currently (as of 2003) in a format war with SACD. Most market observers believe the winner of the war will eventually supplant the Compact Disc due to its superior playback compabilities, unless a new and superior format takes over from either.

You can recognize a DVD-RAM immediately because visually there are lots of little rectangles distributed on the surface of the data carrier.

All above formats are also available as 8 cm (3 inch) sized DVD mini discs (not mini-DVD, which describes DVD data on a CD) with a disc capacity of 1.5 GB.

There are two successors to DVD being developed by two different consortiums: The Blu-ray Disc and the Advanced Optical Disc.

On November 18, 2003, the Chinese news agency Xinhua reports the final standard of the Chinese government-sponsored Enhanced Versatile Disc (EVD) and several patents around it.

On November 19, 2003 the DVD Forum decided with eight to six votes that the Advanced Optical Disc is the HDTV successor of the DVD.