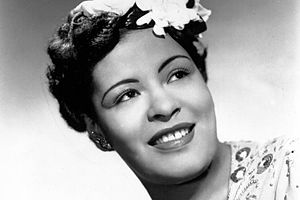 Billie Holiday (April 7, 1915 - July 17, 1959), also called Lady Day is generally considered one of the greatest jazz singers of all time. Born Eleanora Fagan, she had a difficult childhood which affected her life and career.

Much of Billie Holiday's childhood is clouded by conjecture and legend, some of it propagated by herself in her autobiography published in 1950. She was born in Philadelphia but grew up in the Fells Point section of Baltimore. Her mother, Sadie Fagan, was just 13 at the time of her birth; her father Clarence Holiday, a jazz guitarist who would play for Fletcher Henderson, was 15. It's uncertain if they ever married. Clarence abandoned Sadie when Billie was an infant. Billie was largely raised by her mother and other relatives. A hardened and angry child, she dropped out of school at an early age and, allegedly, began working as a prostitute with her mother. This preceded her move to New York with her mother sometime in the early 1930s.

There is controversy regarding her paternity. This stems from a copy of her birth certificate in Baltimore archives that lists the father as a "Frank DeViese." Some historians consider this an anomaly, probably inserted by a hospital or government worker (See Donald Clarke, Billie Holiday: Wishing on the Moon [1]). Clarence Holiday accepted paternity, but was hardly a responsible father. In the rare times Billie did see him, she would shake him down for money by threatening to tell his girlfriend of the moment that she was his daughter.

Settling in Harlem, Holiday began singing informally in numerous clubs. Around 1932 she was "discovered" by record producer John Hammond at a club called Pod's and Jerry's (there is still some dispute among historians about who was the first to hear and publicise her, although it is generally agreed that Hammond was the first). Hammond arranged several sessions for her with Benny Goodman; her first-ever recording was "Your Mother's Son-In-Law" (1933).

It was around this time that Holiday had her first successes as a live performer. On November 23, 1934, she performed at the Apollo Theater to glowing reviews. The performance, with pianist (and then-lover) Bobby Henderson, did much to solidify her standing as a jazz and blues singer. Shortly thereafter, Holiday began performing regularly at numerous clubs on 52nd Street in Manhattan.

She later worked with such legends as Lester Young, Count Basie, and Artie Shaw, breaking the color barrier along the way by becoming one of the black jazz singers of that era to perform with white musicians. Nevertheless, she was still forced to use the back entrance and forced to wait in a dark room away from the audience before appearing on stage. Once before an audience, she was transformed into Lady Day with the white gardenia in her hair. She explained the sense of overpowering drama that featured in her songs, saying, "I've lived songs like that". Even when she was young and singing trivial pop songs, her unique tone and emotional commitment made her performances special.

Holiday was a dabbler in recreational drug use for most of her life, smoking marijuana, in some accounts, as early as twelve or thirteen years of age. However, it was heroin that would be her undoing. It is unclear who first introduced Holiday to the drug, but there is consensus from historians and contemporaneous sources that she began intravenous use sometime around 1940.

Holiday's success was marred by this growing dependence on drugs, alcohol, and abusive relationships. This affected her voice as well, and in her later recordings youthful spirit is replaced by overtones of regret, but her impact on other artists was undeniable. Even after her death she influenced such singers as Janis Joplin and Nina Simone. Diana Ross played her in a movie version of her autobiography, Lady Sings the Blues. In 1987 U2 released "Angel of Harlem", a tribute to her.

Her personal life was as turbulent as the songs she sang. She married trombonist Jimmy Monroe on August 25, 1941. While still married to Monroe, she took up with trumpeter Joe Guy as his common law wife. She finally divorced Monroe in 1957 as she split with Guy. That March 28, Billie married Louis McKay, a mafia "enforcer." McKay, like most of the men in her life, was abusive, but did try to get her off drugs. They were separated from at the time of her death.

Her late recordings on Verve are as well remembered as her Commodore and Decca recordings of 20 years before. Several of her songs, including her signature song "God Bless the Child", George Gershwin's "I Love You Porgy" (covered exactly by Simone), and the rueful blues "Fine and Mellow" are jazz classics.

Her performance of Abel Meeropol's anti-lynching song on Commodore, "Strange Fruit", with the lyric "Southern trees bear strange fruit" gave her a place, not just in musical history, but in American history [2].

Her final years were a tragedy. She had no cabaret card; this kept her from working in New York City clubs for the last 12 years of her life. She was swindled out of her earnings and died with only $0.70 in the bank and $750 dollars on her person. She was arrested on her deathbed; in 1959, narcotic addiction was a crime, not an illness.